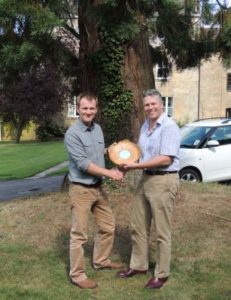 Paul Barton has been named the winner of the 2013 Lockhart Garratt Masters Award, created to recognise and celebrate each year’s top student completing Myerscough Colleges MSc degree in Aboriculture and Urban Forestry.

After studying for a degree in International Development at UEA in 1999 and working for an ethical travel company selling bespoke holidays in Africa, Paul realised that a desk job just wasn’t for him and really developed a keen interest in working with the natural environment. In 2004 Paul enrolled at Cannington College to study for the National Certificate in Arboriculture, whilst working part-time for a local tree surgeon in Bristol. He then spent 5 years working as a freelance climbing arborist sub-contracting for several firms in the southwest. During this time he completed the AA TechCert, and in 2008 began undertaking tree surveys, which led toa role at Swindon Borough Council reviewing their Tree Preservation Orders.

In 2010 Paul moved to the Midlands to work as the arboricultural consultancy manager for Acorn Environmental Management Group and also started to study the challenging, but yet rewarding course at Myerscough.

Dr Mark Johnston stated, “Paul has been an excellent student and I’m delighted for him to receive this award. It is very much deserved considering all the hard work he put in throughout the course and the flair he showed for the broad scope of arboriculture and urban forestry.”

Upon receipt of the good news Paul said, “To be awarded the top student prize is a great honour that I really wasn’t expecting, particularly given the calibre of my fellow students that had such a depth and breadth of knowledge and experience. I would like to thank my course tutor Dr. Mark Johnston for his expertise and support throughout the programme; he brought a wealth of experience and insight to the course which was well complimented by the teaching delivered by other lecturers.

In March 2013 I began work as an independent arboriculturist, and having the MSc under my belt has undoubtedly helped equip me for this new venture and I am full of optimism for a fulfilling and varied future working with trees.”

John Lockhart, Chairman, of Lockhart Garratt Ltd said, “We are delighted to present this award to Paul, his achievements are exceptional, especially given that he has done this whilst developing his own consultancy. I was delighted to meet Paul recently and it is clear that he has an excellent future ahead of him in the industry and we wish him every possible success.”