LG supports the protection of the red squirrel 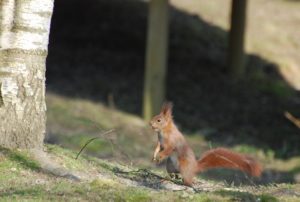 Justin Mumford, Managing Director, was pleased to attend a reception at Clarence House on Monday 20th February to support the work of the Red Squirrel Survival Trust.

The Trust is a national charity established to ensure the conservation and protection of the red squirrel in the UK.  Their aim is to not only protect red squirrels but also assist the winning reds (in areas where population numbers have stabilised or are increasing), establish new red colonies, fund research and raise awareness.

Monday’s reception focused on the protection of the red squirrel from the over-populated grey squirrel.

As we all know grey squirrels are extremely destructive in woodlands, stripping bark from the main stem and branches of trees.  They also carry the Squirrel Pox virus which is deadly to the native red squirrel.  Increasingly, wider impacts of grey squirrels are being recognised as a potential major significance to woodland conservation, biodiversity and sustainability.

Over the years, the control methods for managing the grey squirrel population have included trapping, shooting and Warfarin (now banned); all of which are time consuming methods.  However, on Monday a new oral fertility control drug was introduced, which is currently being developed with support from DEFRA and the Government’s Animal and Plant Health Agency (APHA).  This new drug would provide a humane control with greater effectiveness and lower costs than other methods currently being used in the industry.

The target drug is already in use in injectable form in the USA, and is effective in a wide range of species, including the closely related California ground squirrel.  Preliminary laboratory research at APHA has shown that an orally delivered contraceptive can work.  APHA has worked up a detailed research plan which aims to develop this work into a practical, widely accessible and affordable operational system.

As is often the case, taking forward a new initiative requires a substantial amount of financial input.  It has been estimated that the development of this new drug will cost approximately £1million over a 5 year period.  Of this £196,000 must be raised by 1st April 2017.  Therefore, the Red Squirrel Survival Trust, in support of the UK Squirrel Accord*, are asking for donations to be made in support of this quest, which will provide a long term, effective solution to the management of the grey squirrel population, which in turn will allow our native red squirrel and native woodland to flourish together.

If you would like to support this cause then please send your donations, payable to RSST Ltd UK Squirrel Accord and send to RSST, 17 Cumberland Street, London, SW1V 4LS.

*The UK Squirrel Accord consists of 32 leading woodland, timber industry and conservation organisations throughout the UK and was created at the invitation of the HRH Prince Charles, who had the aim of bringing about a concerted and coordinated approach to securing the future of red squirrels and woodlands, and to controlling the introduced grey squirrel.