With Newt Survey Season fast approaching here’s a bit of information on the species it’s all about. 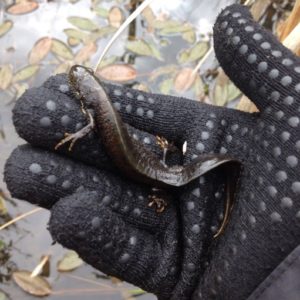 Physical appearance: Great crested newts (GCN) are the largest UK newt species with males reaching up to 15cm and females 18cm. They have dark brown bodies covered with dark spots that make them appear almost black. They have yellow or orange undersides with large black spots.

During breeding season the males are easily identifiable due to a large crest running down their spines. Another crest runs along the top and bottom of their tails. A silver stripe also appears on their tails.

Habitat: They are found across the UK, particularly England and south Wales. They are also found in Europe and parts of Asia. 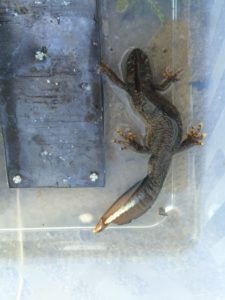 GCN are a mainly terrestrial species, foraging and hibernating on land. During breeding season they move to ponds where they lay their eggs.

They hibernate over winter, using log piles, rubble piles and disused mammal holes. They may also bury into the mud in their breeding ponds.

Protection: Although widespread in the UK their population numbers have fallen dramatically due to destruction of their habitat. In the UK GCN are protected by the Wildlife and Countryside Act, 1981. This make it illegal to intentionally kill, injure or disturb a great crested newt, to possess one or to damage, destroy or obstruct access to any place used by great crested newt for shelter.

Surveying: Surveying for GCN occurs during breeding season (March-June) when they are most likely to be in the ponds.