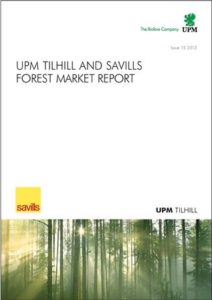 Last week Savills and UPM Tilhill launched the annual report in London and Edinburgh, which shows a modest increase in sales and growth on what is already a strong market for commercial conifer plantations. The key findings were:

Values of property and per stocked hectare have also increased with averages sitting higher than that of previous years.

Jonathan Henson of Savills commented on the findings stating, “As the year progressed, an improvement in the economy led to early signs of growth in the sector. This was strongly supported by a number of forestry investment funds and high net worth individuals who have been active at the top end. Both sectors of the market have been aggressively bidding for good quality spruce forests which offer reasonable scale and access to timber markets.”

Initiatives like ‘Grown in Britain’ have also been praised through the report for its movement to promote and encourage the use of quality productive woodland products.

This Friday (29th November) Justin Mumford will be speaking at the Farm Business Innovation Show 2013, so if you would like to discuss any of the above, or any other forestry topic please do catch up with him.